The vast body of traditional ecological knowledge, which has permitted the adaptive success of large human populations and the maintenance of tremendous biological diversity for more than a hundred centuries, could be used to improve natural resource management. This knowledge is embodied in anthropological collections that are housed at various museums, the memories and continued traditional practices of Native American elders, and the vast historical literature of California. This information can be useful in novel ways, some of which are explored below.

Tying Museum Collections to the Restoration of Native Species

From 1910 to 1915, Charles P. Wilcomb collected plant parts from California tribes for the Oakland Museum’s anthropological collections, mostly from the Miwok, Pomo, Wintun, and Maidu tribes. These plant parts include roots, underground swollen stems (bulbs, corms, and tubers), leaves, stems, fruits, and small grass and wildflower seeds. Mushrooms and insects such as grasshoppers were also collected. These items compose part of the historic diets of different tribes. In addition, some of the plant and mushroom species used by Native Americans were important understory associates in the blue and black oak woodlands of California.

These types of museum collections, used in combination with artifacts, testimonies by Native elders concerning the former uses and management of wild plants, and literature on Native Americans, can be used to identify and catalogue the former biota of different regions and to better understand historic land uses, providing researchers with information relevant to the reconstruction of historic oak woodlands. This type of analysis can point to animals, plants, and fungi that are no longer a part of California’s landscapes, or that previously existed in vastly different species assemblages. For example, a museum collection of edible plant seeds, combined with testimonies from elders and existing reports, revealed that this plant once grew in large, single-species patches (see Figure 1). To improve the utility of the valuable collections at the Oakland Museum, genus and species are being determined where possible, with help from horticulturists, botanists, entomologists, and mycologists.</P?

Today, Native Americans still gather native plants and fungi, conduct tribal business in tribal councils, and continue ancient traditions. Some of the traditional ecological knowledge concerning plant, fungi, and animal species that historically occupied specific oak habitats, as well as former burning practices and harvesting strategies, rests in the memories of elderly Native people and longtime non-Indian residents. Ethnographic interviews are being conducted with elders of the Western Mono, Foothill Yokuts, and Sierra Miwok of the Sierra Nevada, the Salinan of the Central Coast, and the Nor-Rel-Muk division of the Wintu of northwestern California, as well as with knowledgeable non-Indian residents of each area. These interviews have revealed, for example, that blue oak areas within the traditional territory of the Salinan were managed with fire to decrease insects and diseases. The insects of concern were Curculio and Melissopis spp. that inhabit acorns and can severely damage acorn crops. Reconstruction of the Salinan burning regime (season, frequency, observed fire behavior, extent, and slope), in combination with information on the insects’ life history characteristics may help managers evaluate the effectiveness of burning for biological control.

Reviewing the historical literature, including diaries, reports, and unpublished field notes, can provide insight into how Native Americans used, managed, and potentially influenced California’s oak woodlands. John P. Harrington, an ethnologist for the Bureau of American Ethnology who undertook fieldwork among California Indian tribes from 1915-1954, left over one million pages of unpublished field notes, capturing the lifeways of many of the tribes on paper. These writings are rich in information about the former indigenous uses of California’s biota, and they reside at the Smithsonian Institution and are available on microfilm. These and other writings from early anthropologists offer a valuable repository for reconstructing the biodiversity and rich historic human interactions that took place across some of California’s oak woodlands. Currently, Harrington’s writings on the Salinan and Nor-Rel-Muk are being studied for relevant information concerning uses and management of plants in oak communities.

One potential application of historic literature is the combination of recorded harvesting and resource management techniques with theories of population biology and disturbance ecology to develop new approaches and methods for preserving species that have become rare and endangered. For example, buried within the over 10,000 pages of unpublished field notes of John P. Harrington concerning the Salinan tribe, who inhabited the central coast of California for over 9,000 years, are descriptions of the harvesting of the purple amole (Chlorogalum purpureum var. purpureum) with a digging stick for its edible bulb. This is a federal threatened species, known from only approximately five occurrences. A research tack worth investigating is the role that indigenous use and management played in the maintenance of plant populations of this species. In the absence of certain former human disturbances, plant populations may have declined. As noted earlier, blue oak areas were periodically burned by the Salinan, which may have positively affected the abundance of these plants. Field botanists have seen tremendous blooms of the plant after fires that have occurred on Fort Hunter Liggett. While we have no evidence so far that the Salinan replanted propagules and practiced deliberate seed dispersal during the digging process of purple amole, we do know that soaproot (Chlorogalum pomeridianum), a plant in the same genus, was tended by breaking it off above the root, replanting the root crown, and depositing the seeds into the holes. In some areas, tribes set fires to promote soaproot abundance. These techniques may be transferable to other species in the genus and are worth investigating further to recover purple amole.

Indigenous people of each area knew the regional flora so well that they were able to make their living from the land without importing agricultural crops from other regions. As we learn about their discoveries of which plants heal, which plants make music, which plants tie burdens, and which plants nourish bodies, we gain greater appreciation of California’s native plants. The hundreds of species that were historically useful to two tribes, the Nor-Rel-Muk of northwestern California and the Salinan of the Central Coast, are being assembled into an Ethnobotanical Information System (EIS) using a computer database program. This information system involves the cataloguing of hundreds of plant species important to these indigenous groups, and recording many traditional uses. A key feature of the EIS is that it will allow the user to query the system to answer specific questions on topics such as indigenous harvesting strategies (e.g., season, frequency, pattern of harvest) and management methods (e.g., pruning, burning, sowing, weeding). For example, 136 plant species have been tallied so far for specific uses among the Salinan. These species are placed under specific cultural-use categories such as “adhesives”, “basketry”, and “foods”. Among the foods, there are at least seven species of plants whose rhizomes, bulbs, corms, and tubers were dug with a digging stick and eaten by the Salinan. These include bracken fern (Pteridium aquilinum var. pubescens), common goldenstar (Bloomeria crocea), golden brodiaea (Triteleia ixoides ssp. ixoides), mules ear (Wyethia helenoides), purple amole (Chlorogalum purpureum var. purpureum), and rattlesnake weed (Daucus pusillus). These species are categorized by plant community type. Assisting with the design of the information system for the Nor-Rel-Muk are Gary Nakamura and Sherry Cooper, UC Cooperative Extension, Redding. Diana Immel, a UC Davis doctoral student, is assisting with the data gathering and entry for the Salinan Ethnobotanical Information System.

Giving Back to Tribes

Tribes throughout California are interested in rekindling their historic relationships with nature. Findings from this research are being returned to the tribes in support of preservation of their own cultural knowledge and traditions (see Figures 2 and 3). Organizations and government agencies are beginning to recognize the value of indigenous knowledge and its latent, largely unexplored, and potentially enormous contributions to contemporary society. Interest in the management practices of indigenous people has increased since the realization that many of our so-called “pristine” oak woodlands were greatly affected by Native Americans. Further exploration into traditional Native American land management practices may help us restore California’s precious natural and cultural heritage.

I wish to thank the University of California Integrated Hardwood Range Management Program, the California State Office of the Natural Resources Conservation Service (NRCS), and the National Plant Data Center of NRCS for funding in support of this research. 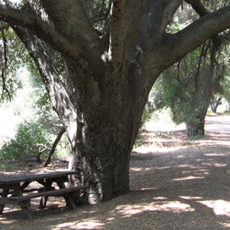 The Cultural Values of Oaks