What is the value of blue oaks in terms of forage production?

The value of blue oaks in terms of forage production has long been debated. In northern California blue oaks have been shown to decrease total forage production as compared to that in open grassland. However, at the San Joaquin Experimental Range (SJER) total forage production has been found to be greater beneath the canopy of blue oaks. A variety of reasons have been identified for this difference: scattered blue oaks occur at SJER as opposed to dense stands further north and climate differences. A cooperative study between CATI, C.S.U. Fresno and U.C. Cooperative Extension (funded by the University of California Integrated Hardwood Range Management Program) has been studying the effect of blue oak canopy on seasonal forage production and quality to better understand this relationship. The study has been conducted in an area of SJER which has approximately 7% blue oak canopy cover, less than 15% slope and a general southwest aspect on an Ahwahnee soil. The years of this study (1986-90) have coincided with the drought cycle we have been experiencing. Annual precipitation at SJER has averaged about 11 inches, compared to a long term average of 19+ inches.

To estimate the integrated effect of forage abundance and quality on grazing animals, crude protein intake of a nursing cow was calculated in both situations (open grassland and beneath blue oak canopy) and related to her daily requirement. The open grassland had only one brief period (March) where daily dietary crude protein intake was in excess of the requirement, while beneath blue oak canopies an excess of crude protein is provided from the period from mid-December through May.

These results are a comparison of two ends of the spectrum: complete blue oak canopy cover and those with no oak canopy. While the typical situation is a mixture of the two, these results clearly demonstrate the value of maintaining an abundance of scattered blue oaks for grazing animals.

Conservation and Collaboration: Vineyards in a Santa Barbara Landscape 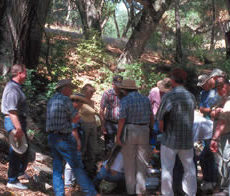