Clearing of noncommercial oak woodlands in rangeland improvement projects and poor natural regeneration were two concerns identified by the Hardwood Task Force of the California Board of Forestry in its December 1983 draft report. Since 1945, the loss of noncommercial oak woodland in California is estimated to be nearly 1 million acres or 13% of the 7.3 million acres total. These losses result from rangeland clearing, road and freeway construction, and residential-commercial development. Limited data suggests the latter accounted for 46% of the annual loss (16,000 acres) between 1973 and 1985, surpassing the loss from rangeland clearing that dominated before 1973.

Loss of oaks is compounded by relatively sparse recruitment in blue oak stands and almost nonexistent recruitment in valley oak stands. Unsuccessful blue and valley oak recruitment generally results from mortality in seedling and sapling stages, rather than from inadequate germination and seedling emergence.

Herbaceous competition has a negative impact on the ability of blue oak seedlings to become established. The benefits of controlling herbaceous vegetation to promote survival and growth of oaks and other hardwoods propagated naturally and artificially are well documented throughout the East, Midwest, and Canada. In California, researchers have demonstrated that reduced precipitation, and competition from weeds greatly reduces blue and valley oak seedling establishment. Oak regeneration projects need weed control strategies that provide choices for various environments and help preserve management options for oak woodlands.

Beginning in 1988, 3 successive annual dryland plantings of 2-month- old blue oak nursery stock were made in late winter at the UC Hopland Field Station and the UC Sierra Foothill Research and Extension Center. The objectives of these plantings were to: (1) compare a one-time application of herbicide mix (atrazine and oxyfluorfen, both soil- active), synthetic (plastic) mulch mats (both porus and impervious), to determine the relative effects of these weed control strategies, on survival and growth; and (2) develop information on costs of weed control. There were 40 seedlings per treatment each year at each location, and the area treated around each seedling was 16 ft.2.

Window screen cages, 15 cm. diam. x 40 cm. tall, were installed over all plantings to protect against damage from insects and small mammals. These also provided an element of protection (shade) against excessive transpiration, since only 40% of incident sunlight is transmitted through window screen cages. That blue oak seedlings are tolerant of reduced sunlight beneath screens is supported by data from other research in which the amount of sunlight transmitted did not seedlings outgrew the screens, the screens were opened but not removed.

Results from this study suggest that initial survival is strongly influenced by weed control, and that such control may be critical in years of extreme drought. On average, weed control promotes 60% more survival than is present in the control, but no particular weed control strategy was better than another.

Growth appears to be influenced by the type of weed control applied (Table 2). Impervious polyethylene has encouraged the most growth, 50% more than present where herbicide was used in an initial application. This difference and the absence of a significant difference between heights in the control and herbicide treatments suggests the value of a persistent weed suppression strategy that may have multiple effects on the soil environment.

Effects on survival and growth produced by herbicide and porous polypropylene in the 1988 planting at SFREC are not different. Subsequent to 1988, photodecomposition of the mats allowed development of similar conditions in both treatments. Because of poor survival in the 1988 planting, statistical differences between treatments at HFC could not be detected.

Costs of weed control are not comparable. Not including labor, the cost of each porus polyethylene mat installed, including mulch mat hold-down pins, was about $1.70. Material cost of a plain (black) impervious polyethylene mat installed was about $0.70. A one-time application of herbicide at planting, the least expensive treatment, cost less than $0.02 per seedling in materials.

The use of synthetic mulch mats may be competitive with cheaper chemical sprays for weed control where use of natural resources is intensive rather than extensive. Intensive use imparts greater value and the protection and enhancement of this value often warrants investment that could not be justified under extensive management where value per unit area is low. In addition, environmental and social considerations have a higher priority in areas of intensive use, and these considerations may be more easily accommodated. 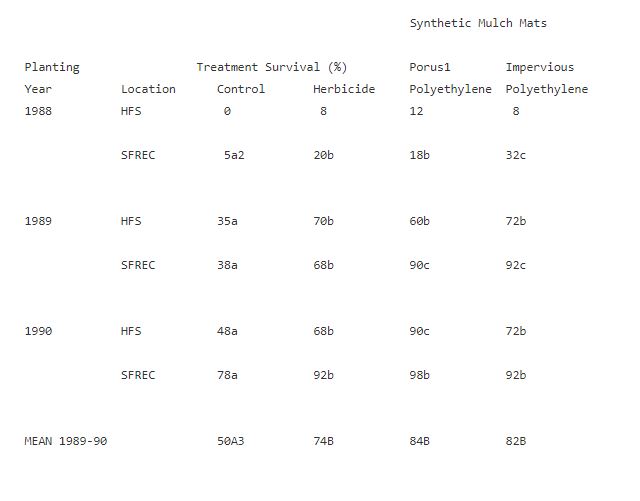